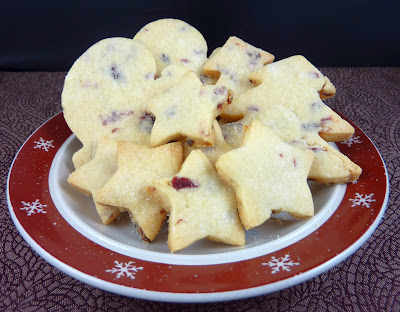 Merry Christmas! Earlier in the Christmas season, my husband came home from the store with an inexpensive box of Christmas cookies. It had a selection of cookies: spritz, sugar cookies, that sort of thing. He asked if I could make a better version of the box of cookies. I thought that was a great idea and the last five cookies that I made were improved versions of those in the box. Here's the inspiration: 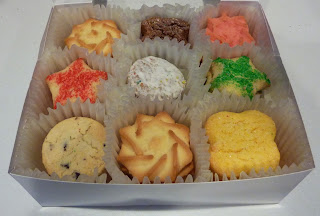 For the spritz, I made snickerdoodle spritz. There was a ginger cookie and I made the ginger cookies with rum glaze. I made fruitcake cookies for the cookies they had with fruit. For the sugar cookies, I made these cinnamon cranberry shortbread. None of the cookies are exact replicas, but I can tell you they taste a lot better than the ones in the box. The ones in the box all kind of tasted the same. Don't my cookies look better? 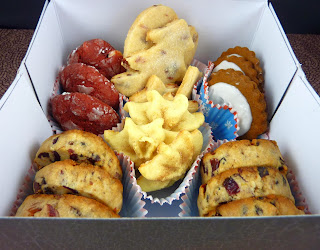 This dough comes together easily and it rolled out without too much fuss. Since they are shortbread cookies, you don’t want them to be too thin. I rolled mine ¼” thick and I think I would make them even a little bit thicker. It’s hard to get very clean edges when you make the cutouts, because the bits of dried cranberries don’t cut so easily. I just had a nice sharp knife available to neaten up the edges. These are a little bit different than sugar cookies, but a really great alternative!

In a medium bowl, whisk together the flour, salt, and cinnamon. In a large mixer bowl, beat the butter until light and fluffy. With the mixer running on medium, very slowly add the sugar. It should take several minutes to add the sugar. Continue to mix until mixture is very light, and nearly white in color. Add the vanilla and almond extract.

With the mixer running on low, add the flour mixture in three parts. Add the dried cranberries and stir until the cranberries are evenly scattered throughout the dough.

Divide the dough into halves. Roll the dough out on a lightly floured surface until it is about ¼” thick. Cut into shapes with cookie cutters of your choosing. Place the cookies on the prepared baking sheets.  Sprinkle the cookies with sugar.

Bake for about 15 minutes, until the cookies are slightly golden around the edges. They should not brown. Allow to cool on the baking sheets for 10 minutes before removing to a wire rack to cool completely.