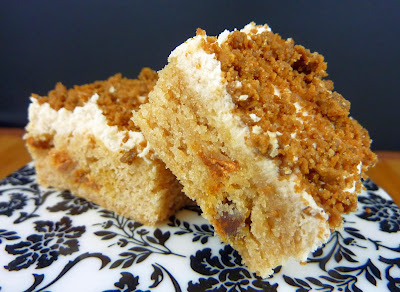 I saw this bar cookie and I thought it just sounded so full of the flavors of the season. Bar cookie with spices and cinnamon chips topped with spiced cream cheese frosting and a gingersnap cookie streusel. Such great flavors all packed into one cookie. The original recipe used some shortcuts, some of which I followed and some that I went ahead and made my own components from scratch.

The base of this cookie is a cake mix, and sometimes it is really convenient to use a cake mix as your starting point. I have a couple of Pillsbury Bake-off recipes that use a cake mix as the foundation and they are great. I used real rum instead of rum extract, but you could use the extract if you wanted to avoid alcohol. (1 tablespoon rum=1 teaspoon extract). I made the frosting from scratch instead of using a premade tub of frosting. I think cream cheese frosting is pretty easy to make and it tastes a lot better! That being said, I meant to use equal amounts of cream cheese and butter, but I used half as much butter. I still had way more frosting than needed. I also had too much streusel.

This dough is super sticky so I didn’t even try to spread it in the pan with a spatula. I just lightly floured my hands and that worked the best. They bake up quickly and cool fairly fast, so you don’t have to wait too long to get the bars fully assembled. Since the base is cakey, they cut fairly easily, too. I hate it when I have to struggle to cut the bars. These cookies are fairly sweet, but I love the combination of the cinnamon and gingersnap streusel.

In a large mixer bowl, combine the cake mix, eggs, oil, run, cinnamon and nutmeg. Beat on medium until smooth. Stir in the cinnamon chips. With lightly floured hands, press the dough evenly into the prepared pan.

Bake for 15-17 minutes, until lightly browned. Allow to cool on a wire rack before frosting.

Make the frosting: in a large mixer bowl, beat the cream cheese and butter until smooth. Gradually add the powdered sugar while the mixer is running on low. Add the rum and cinnamon and then beat on medium-high until fluffy, about 5 minutes. Spread a layer of frosting on top of the bars. (I did not use all of the frosting.)

Make the streusel: in a medium bowl, whisk to combine the gingersnaps, cinnamon, brown sugar, and flour. Add the melted butter and stir to combine. Sprinkle the streusel evenly over the frosted bars. Chill before cutting into bars.

Recipe from The Domestic Rebel