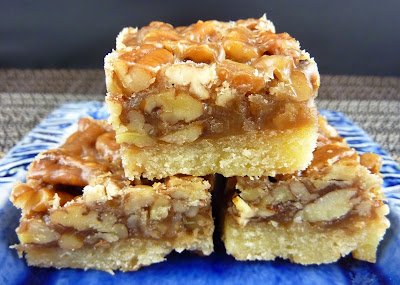 These cookies are basically pecan pie in a bar cookie. I’ve made some similar cookies, but the topping for these was a little bit different in that the filling is made like a caramel, which makes for a different texture. With the extra step of cooking the filling, it becomes a little more like brittle. I was worried that these bars would take a bit too long to make in an evening. They have a couple of steps, but they ended up being not too bad.

These bars are very substantial. I hadn’t realized the used quite as many ingredients as they do when I was first looking at the recipe. These use over a pound of butter, 4 and a half sticks! And they also use a pound of pecans. When I measured the pecans out, it seemed like so many pecans. It ends up being the right amount in the end, so don’t panic about the giant pile of pecans you have for this recipe.

There’s so much butter in these that I’m not sure that lining the pan with foil is really necessary, but the topping is on the sticky side so it just makes things easier. These are pretty rich, so cutting them into small bars is best. The original recipe suggested cooling the bars in the refrigerator, but I was afraid that would make the filling too brittle. I did end up cooling the bars in the refrigerator for about 30 minutes, and that seemed to work great.

Preheat the oven to 350 degrees. Line a 9” x 13” baking pan with foil and spray the foil with nonstick cooking spray.

Make the crust: in a large mixer bowl, beat the butter and sugar on medium until light. Scrape down the sides of the bowl. Add the eggs and vanilla and beat again on medium until well combined. The mixture may look curdled. In a separate bowl, whisk together the flour, baking powder, and salt. With the mixer running on low, gradually add the flour mixture, mixing just until the dough comes together.

With floured hands, press the dough evenly into the bottom of the prepared pan. Bake for 12-15 minutes, until the crust is set. Remove from the oven and allow the base to cool. Leave the oven on while you prepare the topping.

Make the topping: in a large saucepan, combine the butter, corn syrup, and brown sugar. Heat on low, stirring frequently, until the butter melts. Increase the heat to medium high and bring to a boil. Boil for 3 minutes and then remove from the heat. Stir in the heavy cream and pecans. Pour the topping evenly over the partially cooled crust.

Bake for 20-25 minutes, until the filling is set. It will look liquid-y and bubbling when you remove it from the oven, it will set as it cools. Cool for several hours before cutting into bars.

Recipe from Tastes Better from Scratch
Posted by Nicole at 6:00 AM