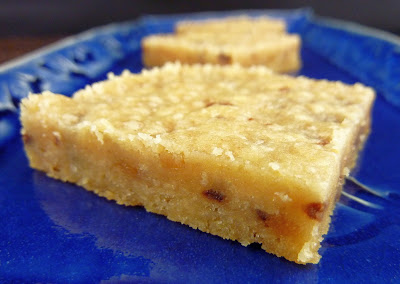 I was originally planning to be away at a conference this week, and I was going to post some cookies that I had made a while ago, but plans changed and I ended up staying home. While I would have liked to make it to that conference, the timing just wasn’t right this year. There’s always next year! I ended up being able to get caught up on some other things at work, so that’s good.

I think this is probably the shortest recipe that I have ever posted, just 4 ingredients. Shortbread by definition is very simple; usually butter, sugar and flour. This uses brown sugar which adds a little depth of flavor, and mixes in chocolate toffee bits. Let’s be honest, shortbread is all about the butter, which there is a lot of! The original recipe called for chopping up Heath bars, but isn’t that why they make Heath toffee chips? I used those instead, and do make sure that you use the bits that also have some chocolate, or they just wouldn’t be quite right.

Shortbread bakes low and slow, so a lower oven temperature for a longer time. These bars are very thin, but do take time to bake. I think I baked mine for about 34 minutes, which worked out. I’d rather have soft shortbread than over baked and crispy shortbread! The cut easily, and I really don’t think that you need to butter the pan as the bars themselves contain so much butter. As expected, these bars are very buttery, but the brown sugar adds nice flavor and the toffee bits add a little bit of crunch, which is very nice!

In a large mixer bowl, beat the butter and brown sugar on medium until light. With the mixer running on low, gradually add the flour. When the flour is almost fully incorporated into the dough, add the Heath bits and mix again on low until combined. Evenly press the dough into the prepared pan.

Bake for 25-35 minutes, until barely browned along the edges. Allow to cool before cutting into bars.

Recipe from Miss In The Kitchen