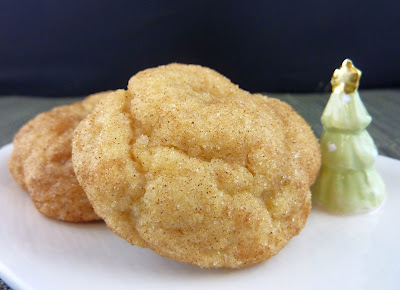 Sometime last December, I saw some gingerbread butter at the store. I like to pick up unusual ingredients when I see them, and I figure that I can find some recipe that uses the ingredient. We traveled a lot last Christmas, so I wasn’t able to use it last year. I knew that this year when I was selecting cookies that I wanted to make for Christmas, something using the gingerbread butter was top on the list.

These cookies are very similar to snickerdoodles. The original recipe called for apple butter and cinnamon. Since I used the gingerbread butter, I decided to add ground ginger to the dough instead of cinnamon. I thought a combination of ginger and sugar might be too potent, so I ended up making cinnamon sugar like you would for a traditional snickerdoodle, but also added a small amount of ginger. Your house will smell amazing if you make these. They are a wonderful soft cookie with great spice flavor, and something that I look forward to making again.

In a large mixer bowl, beat the butter and sugar on medium until smooth. Scrape down the sides of the bowl and add the eggs, vanilla, ginger, and gingerbread butter. Mix again on medium to combine. The mixture may look as though it has separated slightly, but the dough will come together once the rest of the ingredients have been added.

With the mixer running on low, gradually add the flour, baking powder, and salt. Wrap the dough in plastic wrap and refrigerate for at least an hour.

Whisk together the sugar, cinnamon, and ginger. Shape the dough into 1-inch balls and roll the balls in the cinnamon/sugar mixture.

Bake for 11-13 minutes, until the cookies are set. Allow the cookies to cool on the baking sheet for five minutes before removing to a wire rack to cool completely.

Recipe from A Latte with Ott, A
Posted by Nicole at 6:00 AM