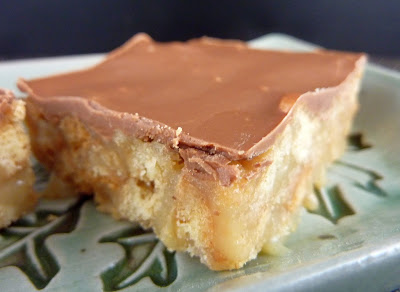 With the warm weather that seems to be settling into the Seattle area, it’s time to look at different types of recipes. I try and make a couple of no-bake recipes each year, and this was the week to try one. Hopefully the weather does cool down, like it is supposed to this weekend, but you never know. Like many of the other no-bake recipes that I make, this is an Australian recipe.

Being an Australian recipe, there are some adjustments that need to be made. The recipe starts out as being sort of vague, which isn’t helpful. It calls for an entire can of sweetened condensed milk, but then later it says to only use part of the tin. I measured how much I used so that’s what you find here. It also called for 1 packet of biscuits. Ok, I know that’s a cookie, but how big is a packet? I did some Internet sleuthing and found that a packet of that type of biscuit is 250 grams. I couldn’t find the type of cookies it called for, so I used Digestive Biscuits. You could also use graham crackers or even vanilla wafers. Finally, the recipe called for copha, which is an Australian version of vegetable shortening; I used Crisco.
I couldn’t find the hazelnut chocolate used for the topping, so I used British milk chocolate. I was worried that I would have too much chocolate, as some of the comments seemed to go that way, but I was fine. The bar itself was chunkier than I expected, but it would have been less so had I chopped the biscuits more. You do need to use your refrigerator for these bars, otherwise they will be too sticky. I took my bars out of the refrigerator to cut them, but with the house being so warm that was about it. These are very stick, so perhaps using a little less sweetened condensed milk would have been a good idea, but they taste great!

Line a 9” square pan with foil and spray the foil with nonstick cooking spray.

Coarsely chop the Digestive biscuits; set aside. In a large saucepan, combine the butter, sugar, and golden syrup. Heat over medium heat until the mixture melts and is smooth. Add the sweetened condensed milk and bring the mixture to a boil. Boil for 1 minute and then remove the mixture from the heat. Stir in the chopped Digestive biscuits. Spread the mixture in the prepared pan and refrigerate for at least an hour.

Recipe from Best Recipes
Posted by Nicole at 6:00 AM