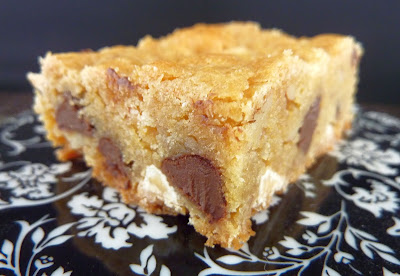 When I am home, I can’t really think of much to do with my time other than, read, look at recipes, and bake. This isn’t all that bad though, as I end up making recipes that may be a little different. My husband often requests chocolate chip cookies, which I don’t make much as they aren’t too exciting to post on the blog. I came across a couple of recipes that are similar to chocolate chip cookies, and decided to try and make those.

These bars are called Nancy Drew Blondies, which was immediately compelling since I am a librarian. In reading the post, it seems like Nancy Drew is lost with the current generation, which is sad. I know that the books do change with the times, not always for the better, but there is something to be said for a strong female character. I do hope that some readers will get their hands on some Nancy Drew books and discover how great they can be.

These cookies are very, very simple. They do not contain butterscotch, but the brown sugar gives a similar flavor. I used pecans rather than walnuts, as those are the nuts that I prefer to use. It bakes in an 8-inch pan, so it doesn’t make very many, but that’s ok. I think it can be a little tricky knowing how long to bake them, so I baked them and kept adding 2 minutes to the timer until they looked golden around the edges. They aren’t quite chocolate chip cookies, as they also contain white chocolate, but they are a very tasty substitute!

Heat the oven to 350 degrees. Line an 8-inch square pan with foil and spray the foil with nonstick cooking spray.

In a small saucepan, melt the butter on low. Transfer the melted butter to a large mixing bowl and mix in the brown sugar, vanilla and salt. When smooth, stir in the egg. Stop the mixer and add the flour, semisweet and white chips, and the pecans. Mix all at once; when the mixture has come together, spread it evenly in the prepared pan.

Bake for 22-26 minutes, until golden along the edges and crinkly on top. Allow the blondies to cool completely in the pan before cutting.

To cut, remove the blondies from the pan by lifting the foil. Peel back the foil and cut into bars.

Recipe from Leite’s Culinaria
Posted by Nicole at 6:00 AM