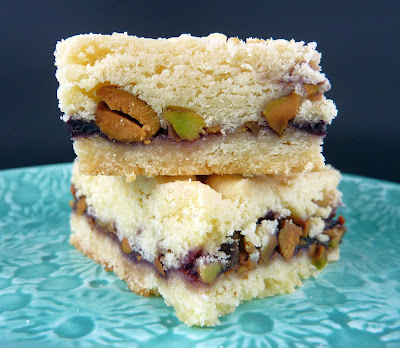 I came across these bar cookies a little while ago, and they have been in my folder waiting for just the right time. The recipe talks about the red of the jam and the green of the pistachios is a perfect combination for Christmas. When I look at these cookies, all I can think of is spring! I wanted to save these for when the weather wasn’t so gloomy, and the time is right.

This is a recipe that can be varied in any way that you would like. If you don’t like pistachios, you could certainly use something different. I think that these would be especially good with almonds. For the jam they suggested raspberry or strawberry jam. At first, I was going to use blackberry jam, but I didn’t have enough so I ended up using blueberry jam. Yes, the taste is a little different, but it’s still very tasty. Just think of these as shortbread bars with jam and nuts.

I did change to blueberry jam, but otherwise I didn’t change anything. I love pistachios and I have to say how happy I am that I can buy them already shelled! The nuts that I used were already salted, so I did not add additional salt. These bars aren’t too sweet, which perhaps varies depending on the jam you use. I realized too late in the game that I was supposed to add the pistachios to the second half of the dough, but obviously I didn’t. They were still tasty, but the nuts weren’t as crunchy as they could have been. Maybe I will try mixing the nuts into the dough using a different combination of jam and nuts!

Heat the oven to 325 degrees. Line a 9” square pan with foil and spray the foil with nonstick cooking spray.

In a large mixer bowl, beat the butter, sugar, and egg on medium until combined. With the mixer running on low, gradually add the flour and salt (if using). Divide the dough into halves.

Press half of the dough into a thin layer in the bottom of the prepared pan. Bake for 10 minutes.

Remove the bars from the oven. Spread the jam in a thin layer on top of the partially baked bars, within ½” of the edges. Top with the chopped pistachios. Carefully shape the remaining dough into a layer on top of the jam, covering as much as possible.

Bake for an additional 35 minutes, until golden. Allow the bars to cool completely before removing from the pan and cutting into bars.

Recipe from Eazy Peazy Mealz
Posted by Nicole at 6:00 AM