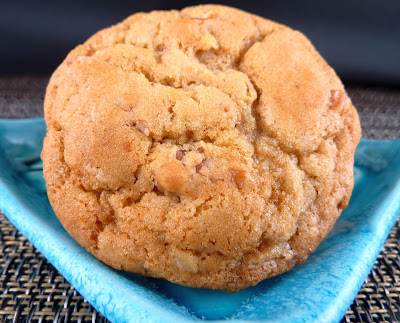 I’ve recently added some responsibilities at work, and it has certainly been a big change. I hope that over time I’ll get more used to these roles, but my calendar and timing have altered significantly. I will make dough, refrigerate it, and then plan to bake it later. But sometimes later doesn’t happen, or I will end up baking the cookies a day or two later. It’s just going to be that way for a while.

These cookies called for walnuts, but I use pecans in baking, always. I think they taste better, and we get pecans from a nice farm in Georgia. We usually run out about the time a new crop is available, which is perfect. You could use any sort of nut that you would like in this cookie, and it would add its own unique flavor. I have some cinnamon sugar hazelnuts that I think would be great!

You start with toasting the pecans, and this is a step that you don’t want to skip. Toasting the pecans will make your kitchen smell wonderful but watch carefully so they don’t burn. The dough is very easy to make, and then needs to be chilled for a few hours. I made mine at lunchtime and figured I would get back to it and I didn’t until a day later. Oh well. These cookies do crack while baking, and the main difference is that they are slightly thinner if you flatten the dough before baking. These are very tasty cookies with the flavors of pecans and brown sugar, hard to go wrong with that!

Once the pecans are chopped, toast them in the microwave, stirring frequently. Set aside to cool slightly.

In a large mixer bowl, beat the butter and brown sugar on medium until light. Add the eggs, one at a time, beating well after each addition. Stir in the vanilla. With the mixer running on low, gradually add the flour, baking soda, and salt, mixing until combined. Fold in the chopped, toasted pecans.

Wrap the dough in plastic wrap and refrigerate for two hours.

Remove the dough from the refrigerator and shape into tablespoon-sized balls and place on the prepared baking sheets.

Bake for 10-12 minutes, until cookies are set and have cracked. Allow to cool on the baking sheet for 5 minutes before removing to a wire rack to cool completely.

Recipe from Sarah Cool, via 12 Tomatoes