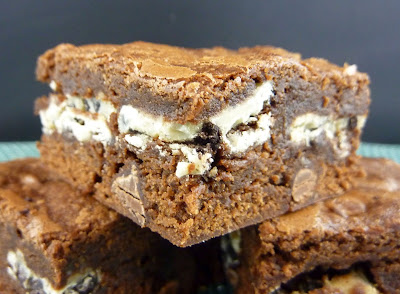 I was planning to make bar cookies last week, but then I realized that I had already made those cookies. So this week I was set on making some sort of bar cookie. When I make bar cookies, I will often make them one day, let them cool overnight, and then cut them the next day. I’m glad I made them a day early this week as I was super tired when I got home from work the night I typically bake.

I looked at the recipes I pinned and I didn’t see anything that really caught my eye, which is ironic as I pin quite a few recipes and I only pin them if I am interested in making them. At any rate, I had seen a cookies and cream brownie in my Pinterest feed that sounded good. I did a search for cookies and crème brownies and found quite a few recipes. I decided on this recipe, which used cookies ‘n’ crème candy bars sandwiched between brownie layers.

I had made a similar concoction many years ago, but it used a brownie mix. This is a one bowl brownie- fairly fudgy as the recipe doesn’t contain very much flour. You could use any type of candy bar in this recipe. I think these would be good with Milka Oreo candy bars, which have some similarities to the cookies ‘n’ crème bars, but with milk chocolate instead of white chocolate. While these bars are pretty simple in all honesty, they are really great brownies. It’s a good fudgy brownie and the candy bar center adds a nice little sweetness. Make sure you don’t bake these too long, as you want these to be nice and fudgy.

Preheat the oven to 350 degrees. Line a 9” x 13” baking pan with foil and spray the foil with nonstick cooking spray.

Spread half of the batter in the bottom of the pan. Top with the candy bars, breaking them into pieces to fit in one layer. Carefully spread the remaining batter on top of the candy bar layer.

Bake for about 35 minutes, until the brownies are almost completely set. Allow the bars to cool before cutting into squares.

Recipe from Cookies & Cups
Posted by Nicole at 6:00 AM