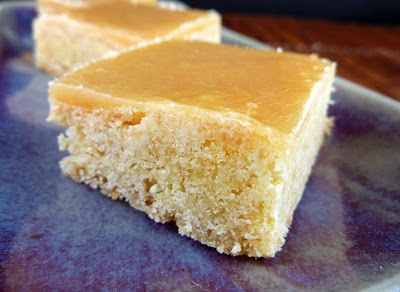 What exactly is a traybake? Many of you may not be familiar with that word, but here in the States it is basically a bar cookie. I often see traybakes in British and Australian publications. The blogger who posted this recipe is originally from Northern Ireland, but now lives in the States. I have cookbooks that have recipes for traybakes, and this recipe also comes from a cookbook that was published overseas.

Another reason I like British recipes is that they tend to make a small batch. If you have visited the UK, homes are smaller, kitchens are smaller, ovens are smaller. When I don’t have anyone to take cookies to, the smaller batch works great. This entire recipe is made in an 8” pan, so it doesn’t make that many cookies.

This recipe is a little different; the bar cookie is relatively traditional, but the topping is not. My dough for the base was a little crumbly, so I added part of an egg yolk and that helped. You make the topping for after the bars come out of the oven, which is so different. The sweet sticky topping is butter, sugar, golden syrup, and ginger. As the filling sets, it depends if you refrigerate the bars or not. Leave them on the counter and the topping is soft, refrigerate it and will be chewy. I opted for chewy. These taste like they are topped with a gingery caramel, and that’s hard to beat!

Heat the oven to 350 degrees. Line an 8” square pan with foil and spray with nonstick cooking spray.

In a large mixer bowl, beat the butter and sugar until light. With the mixer on low, gradually add the flour, baking powder, and ginger. Stir until combined. Carefully spread the mixture into the prepared pan.

Bake for about 25 minutes, until golden around the edges.

About 5 minutes before the bars come out of the oven, prepare the topping. In a small saucepan combine the butter, sugar, golden syrup, and ginger. Heat on medium until the mixture is smooth.

As soon as the bars come out of the oven, spread the topping evenly over the baked bars. Allow the bars to cool, and then refrigerate. Once cool, cut into bars.

Recipe from Ginger Slice Traybake
Posted by Nicole at 6:00 AM