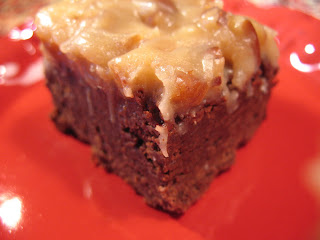 This is the first guest post on Cookies on Friday: by my husband Tim! He likes to bake too and he needed to make something for a work potluck. We’ve bought similar brownies at the store and he recreated it at home. It’s basically a fudgy brownie recipe topped with coconut pecan frosting, which you will typically find in a German Chocolate Cake.

Tim says that they came together really well. He added the flour in with the sugar mixture, rather than adding it at the end, but it turned out ok.

Preheat oven to 350 degrees. Line an 8-inch square pan with foil, allowing the foil to overhang the sides of the pan. Coat the foil-lined pan with vegetable spray.

Wisk the sugar, eggs, vanilla and salt together in a large mixer bowl until combined, about 15 seconds. Wisk in the chocolate mixture until smooth. Stir in the flour until no streaks remain.

Pour the batter into the prepared pan and smooth the top. Bake until a toothpick inserted into the center comes out with just a few crumbs, about 35-40 minutes.

Let cool completely on a wire rack. Top with the coconut pecan frosting and let set completely. Grab the foil and remove the brownies from the pan. (It should come out easily if you’ve placed the foil properly.) Cut into bars.

In a large saucepan combine evaporated milk, sugar, eggs, butter, vanilla and cornstarch. Cook over low heat, stirring constantly, until thick. Remove from heat and stir in pecans and coconut. Spread on brownies while still warm. Allow the frosting to set completely before attempting to cut the brownies. 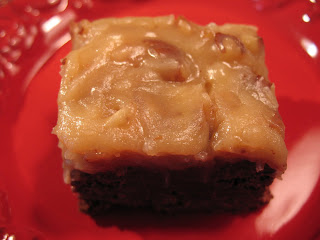 These look great! I love German Chocolate Cake, so I bet these brownies are fabulous!

My dad loves German chocolate cake - and since I am afraid of layer cakes, these look perfect!