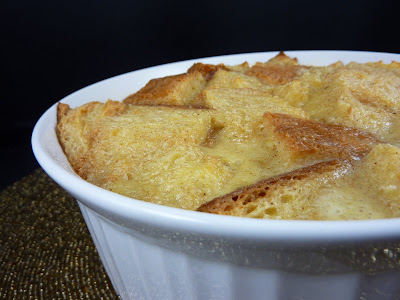 This week’s Tuesdays with Dorie recipe was selected by Sharon from Simply Southern. She chose Bourbon Bread Pudding, which is a fairly traditional bread pudding with the addition of bourbon. You can get the entire recipe on Sharon’s site. I’m not that big of fan of bread pudding, but my husband loves it so I was looking forward to making this.

I can’t say that I have drunk that much bourbon, so I don’t know if I like it or not! I’ve used bourbon in bourbon balls, but I must have used up the bourbon that I had. So I sent my husband to the liquor store to pick up some bourbon. Since I only needed a tablespoon, I told him to just get a small bottle. He came home with very interesting sweet tea flavored bourbon. I’d never heard of such a thing, but I gave it a taste and it was super sweet but really good. This bourbon really shined through in the bread pudding.

Since joining Tuesdays with Dorie, I’ve become a whiz at making custard so this came together with ease. I used some beautiful brioche bread in this, which added extra sweetness. Bread pudding is typically a bit on the soggy side for me but I baked this one a couple of minutes longer and it wasn’t too bad. The cinnamon and the bourbon add great flavor. While bread pudding would never be my first choice for dessert, I’m learning to like bread pudding a lot more than I used to.

Recipe from Baking from My Home to Yours by Dorie Greenspan, page 407
Posted by Nicole at 6:00 AM

Im glad you enjoyed this one, it sure looks good!

Your bourbon sounds so lovely! I've never heard of it either, but I'd love to try it. Great looking bread pudding - glad it was a hit! :)

I sent my hubby out to get the bourbon too! But yours seems to have done much better! Sweet tea bourbon sounds like one that I'd actually like! Well done!

Sweet tea bourbon sounds like something I'd love! Your bread pudding looks great--no wonder it's growing on you!
:)

Oh yum. I love anything bread and anything bourbon so this is unbeatable for me!