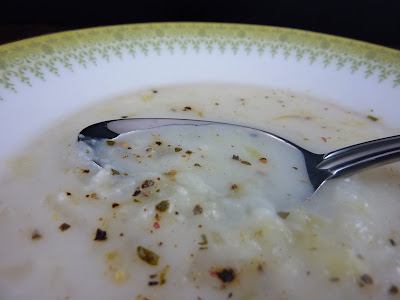 So this is a first for Cookies on Friday. I normally only post baked things but I’ve been participating in my online chat list’s recipe swap and the theme for this swap was soup. I love soup so I wanted to participate. So here it is: the first non-baked thing on this blog. I submitted a sausage tortellini soup and the recipe I got for the swap was this cabbage and Gruyere soup from Mary Ellen over at Mary Ellen’s Cooking Creations.

At first glance, you’d think that this was a horribly fattening soup, but when you look at the recipe (as written) it isn’t too bad. I like cabbage and potatoes in soup. I also have leftover cabbage so I can use it in another soup that I like to make, borscht. This was fairly quick to put together. The only unusual ingredient is the use of a Parmesan rind. You use it like you would a bay leaf: add it in while the soup is simmering and take it out before serving. I was going to leave it out but I was at Whole Foods and they had small containers of Parmesan rinds for sale so I picked one up.

I made the recipe as written with low-fat milk, and I think this made for a too-thin soup. Mary Ellen had used cream and I think that would have been a lot better. Mine soup was quite thin. I thought the Gruyere would thicken it up some but it didn’t really. I think I might also add less broth, so that overall it was thicker. The flavors of the soup were good, so I think this could be excellent with just a few small changes.

In a large soup pot, heat the oil over medium heat. Add the onion and cook until tender, about 5 minutes. Add the potato, cabbage, and 1/2 teaspoon salt. Stir together for a minute, taking care that the potatoes don't stick to the pot.

Add the stock, Parmesan rind, and salt/pepper to taste. Bring to a simmer, then cover and simmer over low heat for 30 minutes, until the vegetables are tender.

Add the milk to the soup. Stir to combine well and heat through without boiling. Add the Gruyere, a handful at a time, to the soup and continue to stir until the cheese has melted. Taste, adjust seasonings. Remove the Parmesan rind.

Recipe from Mary Ellen’s Cooking Creations
Posted by Nicole at 6:00 AM