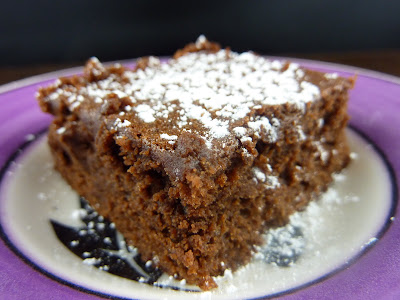 This week’s Tuesdays with Dorie recipe was selected by Hindy of Bubie’s Little Baker. She chose Ginger Jazzed Brownies. These are simple looking brownies that have an intense ginger flavor due to ground ginger and ginger root. I love ginger and I was really excited when I read that these had been picked. You can get the complete recipe on Hindy’s blog and don’t forget to check out the Tuesdays with Dorie site to see how the bakers fared with this week’s recipe.

I followed this recipe with just one change. I used Golden Syrup rather than corn syrup because I was out. I find it strange that I have British ingredients such as Golden Syrup and Bird’s Custard Powder on hand but I run out of such a classic American ingredient. Golden Syrup worked wonderfully and I think I like it more than corn syrup anyway. (I should research how they are different; I am a librarian after all!)

When these come out of the oven, they look like classic, deep, dark brownie. They are as easy to put together as a one bowl brownie, but somehow you mess up lots of dishes: a mixer bowl, a bowl for the flour, a bowl to melt the chocolate in, and a bowl for the sugar/ginger root mixture. Despite all the dishes, they are really easy to make. I baked mine for the longer range of time and they are still quite fudgy. The ginger flavor is very intense, which is just fine by me!

Recipe from Baking from My Home to Yours by Dorie Greenspan, page 101
Posted by Nicole at 6:00 AM

I keep forgetting to use my golden syrup! These were delicious!

These look so good. Walmart was out of unsweetened chocolate today so I'll make the recipe next week!
I do love ginger and am excited to see how they taste in a brownie!

So pretty! I've got a bit of Golden Syrup left that I need to use up - sounds like a great sub! :)

Lovely brownie! I'm glad the golden syrup worked. I made them once with agave and it was fine too.
Thanks for baking with me this week.

I've got to learn more about this Golden Syrup.

Agreed on the deliciousness...and amount of dishes.

I think you have reminded us all of our golden syrup, sitting in the pantry waiting to be used! Glad these worked so well for you.