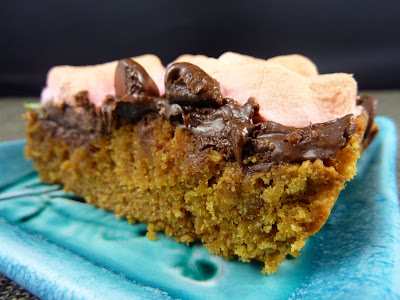 For this recipe swap, people submitted different Thanksgiving desserts. I lucked out and got this pumpkin s’mores bar cookie recipe from DeLish. I love making bar cookies and I had originally planned to make these closer to Thanksgiving, but having my oven die changed those plans. The oven has been replaced and now I can bake again to my heart’s content. These certainly work for an occasion beyond Thanksgiving. They’re great no matter when you make them.

S’mores are all the rage these days, especially this past summer. I have a bunch of s’mores recipes bookmarked, but so far the only thing that I have made is a s’mores cake for a friend at work (and I haven’t gotten around to posting that yet). I was happy to give another s’mores recipe a try, and I was curious about the addition of the pumpkin. I’ve grown to like pumpkin a lot more than I used to, and I like all of the other flavors in these bars so I figured they would be really good.

These are kind of Christmas-y since I used Christmas marshmallows. My husband had picked those up at the store and they make the bars festive. It’s a little hard to tell when these are fully baked through as you can’t test them very easily with all the chocolate chips and marshmallows on the top. I baked mine a little over 30 minutes to make sure they were done. These bars are very tricky to cut, as the marshmallows are very sticky. My marshmallows were bigger, too, which may have made them even more challenging to cut. So they don’t cut the cleanest, but they taste very good! Thanks for the recipe DeLish!

In a large mixer bowl, beat the butter and sugar until light & fluffy. Beat in egg until combined. Add in the pumpkin, then vanilla. Stir to combine.

Bake for 25-30 minutes or until brown. Allow to cool before cutting into squares.

Recipe from DeLish
Posted by Nicole at 6:00 AM

wow, those sound amazing! When you have a chance, could you email me at spikethebaker@gmail.com? I have some TWD info for you. Thanks!