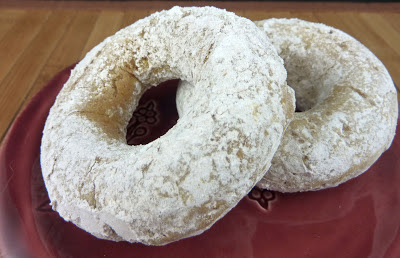 I don’t usually have enough time to bake treats for breakfast, but after a long week I decided to sleep in on Saturday morning. I thought nothing would be nicer than fresh baked donuts. I had spotted this recipe and knew that they would be perfect. I had some pumpkin in the fridge and this uses just about the amount that I needed. And baked donuts, they take no time at all!

This makes about a dozen donuts (I got 11) but I only have one 6 donut pan. Luckily, they bake so quickly that it’s no trouble to do two batches. Don’t try spooning the batter into the pan; that’s way too hard. Just put it in a piping bag or a ziplock bag and pipe them in. It takes about 20 seconds when you pipe them in, I can’t imagine how long it would take if you spooned it in.

The batter for these is fairly thick, which I wasn’t expecting. These don’t have any eggs, which I thought was strange but they turned out ok. I’d never made a powdered sugar/cinnamon mixture and that was different. I think I would prefer regular cinnamon sugar or like a cinnamon glaze. Still, these were very tasty and so nice fresh from the oven. I love the spices, and could even add some more. It was very nice to have these on a lazy weekend morning!

Spoon batter into a piping bag (or plastic bag) and pipe into the wells of the prepared doughnut pan.  Fill about half full.

Bake for 10-12 minutes or until the donuts gently spring back when touched.  Cool in the pan for 5 minutes before removing from the pan.

Combine the powdered sugar and cinnamon in a ziplock bag.  Add a couple of donuts to the bag at a time and shake until thoroughly coated. Repeat with the remaining donuts.

Thanks for the shout and glad you enjoyed something new.

You're right that it's the perfect recipe for using up that last bit of pumpkin. Also agree about piping (which is what I did and added to the original instructions) but kept the spoon thing just in case.