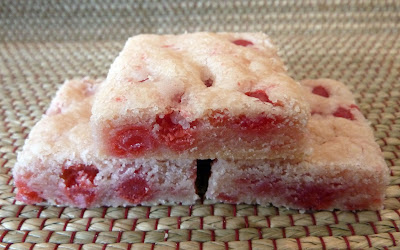 I’ve had a few Valentine’s recipes set aside for a while, and I thought I would make them a bit early in case you are still working on finding just the perfect thing to make to celebrate the holiday. Ok, so maybe you aren’t a Valentine’s Day fan, that’s ok! I really like Cinnamon Red Hot Imperials, so this recipe works for cinnamon lovers too. One February, Cold Stone Creamery had Cinnamon Re Hot ice cream and it was fantastic! I sure wish they would have that again. In the meantime, I’ll just have to be happy with this shortbread.

I have had this recipe pinned for the longest time, and I couldn’t wait to make it. I actually made two batches of this shortbread, as I had plenty of Red Hot candies and I wanted to take these in to work. 16 cookies is just not enough to share! The original recipe had you chill the dough for 30 minutes. I did that with the first batch and didn’t with the second. I couldn’t tell the difference, so chill the dough if you would like, or just mix and bake. Both ways you will be successful.

The base of these cookies is with Red Hot Imperial sugar, which you make by processing sugar and Red Hot Imperials. The candies are pretty hard, so this takes a couple of minutes. I never got it to where the Red Hot Imperials were completely ground, but that’s ok. Make sure you score the bars when they are warm or they will be really hard to cut later. These cookies have great flavor, and are an interesting mix of the kind-of-hard Red Hot Imperials and buttery shortbread. If you love cinnamon like I do, you will love these!

Preheat oven to 32 degrees. Line an 8” square pan with foil. (No need to butter the foil.)

In a food processor, process the sugar and Red Hot Imperials until powdery. Measure ½ cup of the sugar for the dough and reserve the remaining sugar for another use.

Press the dough into the prepared pan. Bake for about 30 minutes until top is dry and edges are slightly browned. Remove from oven and allow to cool for 5 minutes. Lift the foil out of the pan and place the shortbread on a cutting board. Using a sharp knife, score the warm shortbread, cutting it into 16 squares. Cool completely and cut into bars using the score marks you make when the shortbread was warm.

Recipe from The Traveling Spoon
Posted by Nicole at 6:00 AM