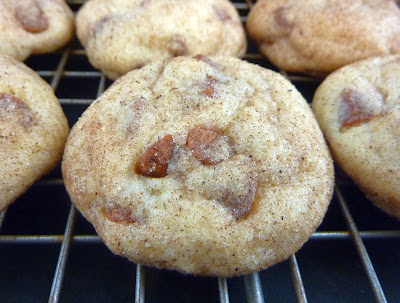 I’m trying to get some fall baking in before the Christmas cookie season begins, and cinnamon is the perfect fall flavor. I was looking for recipes and came across an article with fall cookies and this was one of the recipes in that article. I knew I was coming home late from work, so I wanted something straight-forward. It’s also my birthday and I love snickerdoodles. So a chai cinnamon snickerdoodle sounded just perfect.

I read through the recipe and I was sure that I had all the needed ingredients, but I didn’t have enough cream of tartar, which is really odd. I make snickerdoodles frequently and cream of tartar is a key component. I had some, and you can also substitute vinegar for cream of tartar, as they are both acids. I wasn’t sure how these cookies would turn out, but I was hopeful. I don’t usually mess with the leavening agent in cookies, but I didn’t have time to go to the store. The original recipe called for cardamom in the spice mix, but I don’t care for that, so I added more ginger.

This dough is softer than traditional snickerdoodle dough, which is why it requires refrigeration. I refrigerated the dough for 90 minutes and it was still soft and a little bit sticky. The cookies shaped up just fine and despite not having the correct leavening, they baked up perfectly well. This makes a larger batch, 4 dozen, which was good in this instance as I needed to take these cookies to two different places. They have a great spiced flavor, more complex than just cinnamon would add, and my kitchen smelled divine while they were baking!

In a medium bowl, whisk together the ½ cup sugar, cinnamon, ginger, cloves, and nutmeg; set aside.

In a large mixer bowl, combine the butter, shortening, sugar, and 2 tablespoons sugar/spice mixture. Mix on medium until light. Add the eggs and vanilla and mix again on medium until combined. In a separate bowl, whisk together the flour, cream of tartar, baking soda, and salt. With the mixer running on low, gradually add the flour mixture. Add the cinnamon chips and mix on low until the chips are evenly distributed in the dough.

Wrap the dough in plastic wrap and refrigerate for at least an hour.

Shape the dough into 1-inch balls and roll the balls in the sugar/spice mixture.

Bake for 10-12 minutes, until set. Allow the cookies to cool on the baking sheets for 5 minutes before removing to a wire rack to cool completely.

Recipe from Taste of Home
Posted by Nicole at 6:00 AM