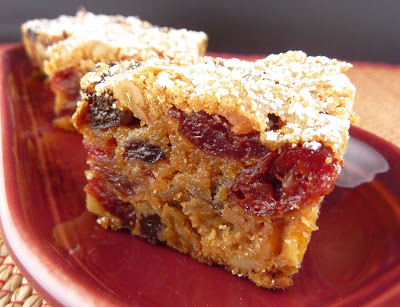 Merry Christmas! For Christmas Day, I’ve decided to make Fruitcake Bars. Fruitcake has a terrible reputation here in the States, but in our household, we always make Christmas cake, which is a fruitcake. I think many people dislike the candied fruit, and I don’t disagree. We don’t use candied fruit in our Christmas cake or in these bars; dried fruit is much better. This bar recipe uses quite a few ingredients, some that I had to stock up on. If you are unable to find certain dried fruits, you can certainly substitute for what you can find, just ensure that you use the same total quantity (5 cups).

I hadn’t initially planned on making these bars, but when we were in downtown Seattle at Thanksgiving, we stopped in the Dahlia Lounge Bakery and they had these one for sample. I was distracted and didn’t try them, but Tim did, and he thought they were great. He went online and found the recipe and I knew they would be perfect for Christmas.

The original recipe had you make these in one go, but I wanted to give the fruit some time to soak up the brandy. You barely heat the brandy and the add it to the dried fruits. The recipe had you let this sit until cool, but I waited until the next morning to bake the bars. I think that made the bars even better, but I am a big fan of fruitcake so perhaps I am not the best judge. These take a bit of time and energy, but it really isn’t Christmas in our house without fruitcake.

Heat the brandy in a small saucepan over medium-high heat and bring to a simmer; remove from the heat. In a large bowl, combine the dried fruits. Add the brandy and stir to combine. Cover with plastic wrap and allow to steep overnight.

Heat the oven to 350 degrees. Line a 9” x 13” pan with parchment or foil and spray with nonstick cooking spray.

In a medium bowl, whisk together the flour, allspice, cinnamon, cloves, nutmeg, and salt. Add 1 cup of the flour mixture to the dried fruits and stir to combine. In a large mixer bowl beat the butter and brown sugar until well combined. Add the eggs, one at a time, mixing well after each addition. Add the vanilla and stir to combine. With the mixer running on low, gradually add the remaining flour mixture.

Remove the bowl from the mixer and stir in the dried fruits and pecans with a spatula. Spread the mixture evenly in the prepared pan. The mixture will be thick and heavy.

Bake for 50-55 minutes, rotating once during baking, until a toothpick inserted into the fruitcake comes out nearly clean. Cool in the pan for an hour and then remove from the pan and cool on a wire rack until completely cool, about an hour. Peel off the parchment and cut into bars. Sprinkle with powdered sugar before serving.

Recipe from Tom Douglas, The Dahlia Bakery Cookbook
Posted by Nicole at 6:00 AM