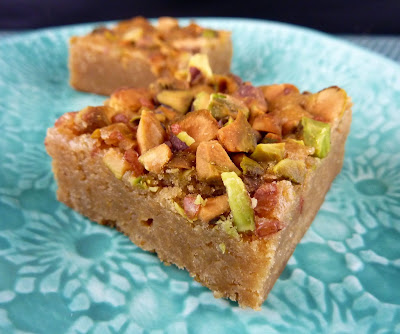 I’ve done a lot of baking lately, and I have been trying to use up different ingredients that I have on hand. I was looking through things that we have on hand, and I had a partial bag of pistachios. So often, pistachio recipes call for a larger quantity, so I needed to find a recipe that didn’t use a lot. I measured what I had, and I only had about ½ cup, so I was quite limited.

In my searches, I found two possible recipes. One had you roll the dough in pistachios and this one, which sprinkled the pistachios on top of bar cookies. I had made a recipe similar to the first one, so I decided to make these pistachio bars. They are even more special as they have browned butter and honey. I just used regular honey, rather than the specialty honey that the original recipe used.

This makes a small batch, which is what I look for these days! The bars are a cross between bar cookies and cake, but that’s ok. They are very soft when they come out of the oven but then firm up as they cool. They’re never going to be the sturdiest bars, but that’s ok. If you wanted, you could drizzle the bars with additional honey before serving, but that would make them quite messy. I baked the bars for 25 minutes and they are done, but they are still quite gooey in the center. Gooey or not, they taste fantastic, with the pistachio and salt coming to the forefront.

Heat the oven to 325 degrees. Line an 8” square pan with foil and spray the foil with nonstick cooking spray.

First, brown the butter. Cut the butter into pieces and place in a small saucepan. Heat on medium-low until melted and continue cooking until the butter slightly browns and is fragrant. Do not brown too much.

In a large mixer bowl, beat the browned butter, brown sugar, and honey on medium until combined. Add the egg and egg yolk and beat again to combine. Stop the mixer and add the flour and 1 teaspoon salt. Mix on low until the mixture comes together. Do not overmix.

Spread the batter in the prepared pan. Sprinkle with the chopped pistachios and about ¼ teaspoon sea salt.

Bake for 23-25 minutes, until golden and the edges are set. Allow to cool in the pan and then lift the bars from the pan and cool completely on a wire rack before cutting into bars.

Recipe from Baker by Nature
Posted by Nicole at 6:00 AM