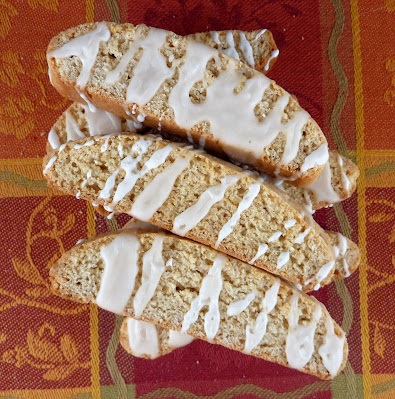 I do love the flavors of fall, and apple cider is one of those great flavors. One year when my husband and I traveled to Michigan, we visited a cider farm. It was during the summer, so it was a little off season, but they still offered ice-cold cider, and it is just about the best thing ever. We buy apple cider at the store, if we can find cider that is local, but it isn’t quite the same as the wonderful cider we had at the cider farm.

I looked at a couple of biscotti recipes, and I thought that I would make these since they called for apple cider. They also contain cinnamon, which is a favorite of mine. I think that the other biscotti recipes I came across will eventually get made, but that’s for another day. I do have to say that I realize that some folks don’t care for biscotti all that much, but I do enjoy making them. I will say that biscotti are the most difficulty cookies to photograph!

These biscotti are easy to make, and they are quite forgiving. When I first mixed the butter and sugar, by the time I added the cider the mixture separated. I was worried but hoped that it would come together. I figured apple cider is an uncommon ingredient and perhaps it reacts strangely, so I proceeded and thankfully the dough came together once the flour mixture was added. Otherwise I didn’t have any issue, although I always need more glaze than the recipe makes! The apple cider flavor of these biscotti is subtle, but they make a nice crunchy cookie.


Heat the oven to 350 degrees. Line a baking sheet with a silicone baking mat.

In a large mixer bowl, beat the butter, sugar, and eggs on medium until blended. Add the apple cider and stir to incorporate. Don’t worry if the mixture separates somewhat. In a separate bowl, combine the flour, baking powder, cinnamon, nutmeg, and salt. With the mixer running on low, gradually add the flour mixture, mixing just until the dough comes together.

Divide the dough into two halves. Shape each half into a log about 12 inches long. Place on the prepared baking sheet and flatten to about ½” thick, make two logs that are approximately 12” long and 3-1/2” wide. Allow room between the logs of dough for the dough to spread.

Bake for 25 minutes, until the logs are golden. Allow to cool for 10 minutes.

Using a sharp knife, slice the logs into ½” slices. Place the cookies cut side down on the baking sheet. Bake for an additional 10 minutes, until the biscotti are firm. Transfer the cookies to a wire rack and allow them to cool before glazing.

To make the glaze, in a small bowl combine the powdered sugar, 2 tablespoons apple cider, and cinnamon. Whisk until smooth. If the glaze is too thick, add additional apple cider. Drizzle the glaze over the cooled biscotti.