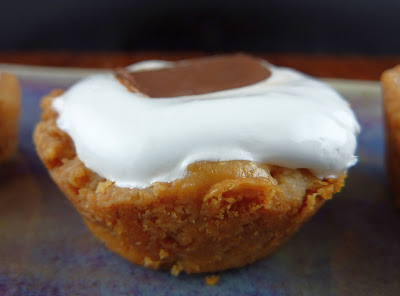 Tassies are one of my favorite types of cookies to make. They’re generally quick to make, although they do require a little bit of work to form the crust. I don’t really think about this too much, but my friend made some pecan tassies around the holidays and she texted me that they are so fussy. I suppose that is true, but I know that’s just part of the process. These are no exception, as the crust takes so patience to form it in the cup, but at least it makes a smaller batch?

Over the holidays I went through my iPad and found all the recipes that I had photographed. I often forget about those recipes, so I took the time to do a basic write up for some of the recipes. They are much less likely to be forgotten if I do that! This recipe was perfect as it used some ingredients that I had anyway: cream cheese, graham cracker crumbs, and chocolate. The original recipe called for rectangles from a Hershey bar, but I used the chocolate I had on hand. The only ingredient I needed was marshmallow crème.

Gosh, I forget how sticky and how difficult marshmallow crème is to work with! It is nearly impossible to measure accurately, so do the best that you can. It wasn’t too bad in the filling, but when you dollop a bit on top of each tassie it is just so messy! I think the only change I would make is that I would put the marshmallow crème and chocolate under the broiler to toast rather than baking it for a couple of minutes. These are good, pop in your mouth bits of s’mores, and they are really hard to beat.

In a large mixer bowl, beat half of the cream cheese and 1/3 cup butter on medium until combined. Stir in the flour and graham cracker crumbs. Divide the dough into 24 pieces and press onto the bottom and up the sides of the prepared mini muffin cups. Bake for 5 minutes.

Make the filling: in a separate bowl, beat the sugar and the remaining half of the cream cheese on medium until smooth. Beat in the egg and vanilla, and then add ½ cup of marshmallow crème and mix on low until combined. Fill each partially baked tassie with 2 teaspoons of the marshmallow filling.

Bake for 15 minutes, until light brown and the filling is puffed.

As soon as the tassies come out of the oven, top each with about ½ teaspoon marshmallow crème and a piece of chocolate. Bake for an additional minute or two to soften the chocolate. Or brown under the broiler.

Cool in the pan for 10 minutes, then remove from the pan and allow the tassies to cool completely on a wire rack.