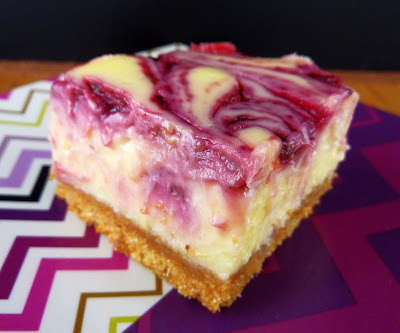 Do you make cheesecake often? I think that cheesecake can be very challenging, and I have yet to make a cheesecake that didn’t have some sort of crack in the top. Some folks say that is completely normal, but I don’t see cracks in professionally made cheesecakes. I’ve tried so many things, water baths, etc. and nothing seems to help. I know many who make cheesecakes and that’s their thing. That isn’t the case for me.

The closest that I can successfully create is a cheesecake bar cookie, but I hadn’t made that in a while. There are less errors with a bar cookie, but the flavors are about the same. I came across this recipe and thought that lemon cheesecake combined with a berry topping would be great. The original recipe called for raspberry pie filling, but I had blackberry jam that my friend had made, so I chose to use that. I think any sort of berry topping, or even anything that works with lemon would be a good choice.

These bars take a little longer to bake than some cookies, but they are not nearly as involved as a cheesecake. They bake in two stages, but you can prepare the filling while the crust bakes. The swirl on top can be as simple as you want. I find that if you swirl in the jam/pie filling too much it becomes too uniform, and you don’t want that. The bars still jiggle in the middle when they come out of the oven, but the firm up as they cool. These bars are quite thick, and you could likely make them in a 9” pan for a slightly thinner bar. These are sweet, but have the tanginess of cheesecake mixed in, which is very nice.

Heat the oven to 350 degrees. Line an 8” square baking pan with foil and spray the foil with nonstick spray.

In a medium bowl, stir together the graham cracker crumbs, sugar, and melted butter. Press the mixture evenly into the bottom of the prepared pan.

Bake for 8 minutes. Make the filling while the crust is baking.

In a large mixer bowl, beat the cream cheese, lemon zest, sugar, sour cream, flour, and vanilla on medium until smooth. Add the eggs and beat again to combine. Spread the mixture over the partially baked crust.

Spoon the berry jam/pie filling over the cheesecake layer in small dollops, and then swirl with a knife to make a decorative pattern.

Bake for 35 minutes. Allow to cool before refrigerating. Refrigerate for 2 hours before cutting into bars.

Recipe from My Incredible Recipes
Posted by Nicole at 6:00 AM